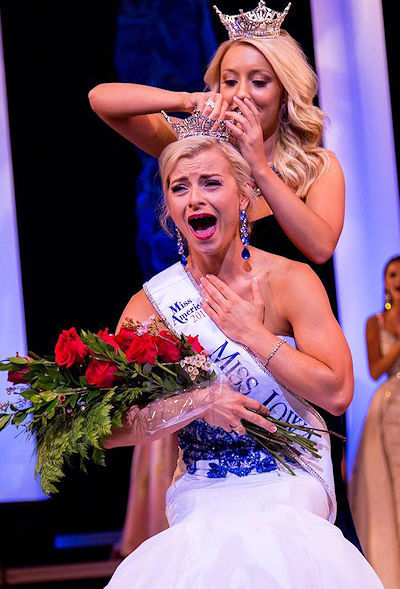 With a contagious laugh, the comfort of the girl next door and the heart of a servant, our reigning Miss Iowa 2017 Chelsea Dubczak shared that she is okay with never buying a new pair of shoes for the rest of her life.  Sure, the glitz and glamour can be fun at times, but this queen is more concerned about her overall impact during her year as Miss Iowa.  Dubczak has dedicated her year to helping others love their bodies and themselves for their ability rather than measurements and appearances.  The personal trainer shares that this has not always been an easy feat, especially when being thrusted into the spotlight for the opportunity of a lifetime – competing on the Miss America stage.

Dubczak has always known that she wanted to be on “that stage, someday”.  After attending many local Miss America competitions with her mother Lori, a former Miss Onalaska local pageant board member in Wisconsin, the young Dubczak fell in love.  “It was fun for me to watch and take notes and dream about being on that stage…and now, here I am.”

Dubczak, now 24, is an accomplished classical opera singer and vocal coach, earning a degree in Vocal Performance from Drake University in 2015.  She credits her success to her mother, a professional musician, for exposing her to music since she can remember. Dubczak is trained on many instruments, including the flute and the piano.  Although she is now known for her singing, Dubczak shares that she did not start pursuing opera until around age 14.

“I started singing all the time during high school.  My mom said, ‘we’re going to get you lessons, otherwise you are going to hurt yourself.’”  Early on in her lessons, Dubczak’s teacher saw her potential to be an opera singer, which was not exactly what Dubczak had in mind.  “That’s what every 14 year old girl wants to hear, right? No, I was going to be the next big pop-star,” Dubczak said with the utmost sarcasm. “Now here I am, eight years later with a degree in opera.”

In October of 2016, Dubczak won the title of Miss Metro at the Miss Greater Des Moines Scholarship Pageant.  This local title earned her a ticket to the Miss Iowa stage in June of 2017 where she would share her passion for her platform, Ladies Who Lift.

Six months after graduation, Dubczak started working with a personal trainer to maintain a healthy lifestyle. It was then that she realized her true passion for the craft, which led to an exit from a job she got simply to “pay the bills”. Dubczak is now the epitome of a healthy lifestyle, sporting toned “traps” and immensely defined legs and abs.  Her strength is powerful, and shows women that they can love their ripped bodies and still be a beauty queen.

“I improved my relationship with my body, [started to] share my personal story, and realized how my journey inspired other people.”

After gaining her official trainer certification, she thoroughly crafted what she calls an evolving platform, encouraging others to not focus on their weight, but focus on their body’s overall health.

“Ladies who lift is all about serving your body to the best of it’s ability.  If you are tired and you just can’t get to the gym, that is fine- do something else.  Go for a walk, stretch, mobilize.  Make sure that your body feels good. Everyday does not have to be just a butt-kicking, sweaty workout.”

Dubczak’s dedication to her music and fitness paid off immensely.  After winning both the preliminary fitness award in swimsuit and the preliminary talent award for her rendition of Sempre Libera from the opera La Traviata, Dubczak took home the Miss Iowa crown on the finals night of June 24th, 2017.

Her crown was accompanied by a brand new car adorned with a “Miss Iowa Scholarship Program” decal, a furnished 2 bedroom apartment in Davenport, Iowa, an elaborate fur coat (a Miss Iowa tradition), and more than $10,500 in scholarships.  The main role of Miss Iowa, however, is to act as a servant to her community full-time.  This can come occur in many ways from performing at charity events, varied volunteerism, creating service projects in Iowa and using her time to promote her social platform.

The crown came with a few things that were not outlined in the program book as well, including becoming an instant role model to young women throughout the state of Iowa, and the pressure of the most recent titleholders placing within the Top 12 of the 52 contestants at Miss America in Atlantic City, New Jersey since 2014.

Just two months after being crowned, it was time to fly to Atlantic City where she would spend two weeks promoting the big event, while also competing in the preliminary competitions.

Dubczak competed in five phases of competition – a ten minute Private Interview with a judges panel, Lifestyle and Fitness swimwear, a 90 second Talent showcase, Evening Gown, and an On-Stage Question. In order to make it to the nationally televised stage on September 10th, Dubczak would have to score high enough to make it into the Top 15.

Being that she swept the Miss Iowa stage as a double preliminary winner, Dubczak felt especially stressed about these performances, wanting to do the same at Miss America.  Sadly, the pressure got to Dubczak in a way that she did not expect.

“If I can be completely honest, I was developing a really negative relationship with food and exercise.  I had shifted back to that paradigm of, ‘well, how is my figure going to look if I eat this?’… ‘Am I going to feel good after eating this?’… If I did not get in the perfect workout, I did not feel good about it. It got to the point where it consumed all of my thought.”

Realizing that this was unhealthy and against everything that she preaches with Ladies Who Lift, Dubczak had to check herself to stay focused on the competition.

Although she has no regrets and executed an “impeccable” and “absolutely perfect” performance in all phases of competition, Miss Iowa 2017 did not make it into the finals, which meant that she would not get a chance to officially compete for Miss America among the Top 15.

“I just felt like a really big disappointment to a lot of people that I cared about and was grateful for.  Facing them and facing the faces that didn’t know what to say to me, that was the hardest part [about coming home].  I had a real serious talk with God on the plane- I let him know exactly how I felt.”

Dubczak did however walk away with the Non-Finalist Talent Award, along with knowing that everything happens for a reason.

Dubczak is now focusing on her state, sharing that being Miss Iowa is the “greatest job in the world”.  Miss America does, however, mark the end of her pageant career, which Dubczak shares will be a transition. “Miss America was my 13th and final pageant.  Pageantry has taken up most of my spare thoughts; I kind of just knew what to think about.  Now, it is kind of just like, ‘now what?’.”

The answer to that is truly unknown. “I just have to trust that God has some pretty big doors to open,” Dubczak said.

What she does know is her drive to continue to be an inspiration to people across the state.  She is ready to share her gift of voice and her testimony about Ladies Who Lift.  She also put in a shameless plug for her holiday booking details jokingly, but it is easy to see her willingness to be a servant to the community.

“I have never felt more loved in my life… I really feel like I am fulfilling my job when random people message me on social media who I have never met before- maybe [living] across the country- saying things like, ‘I just want to let you know that you were my inspiration for my monologue about my powerlifting experience, and I wasn’t even going to run, but you inspired me to’.”

It is moments like this that keep Dubczak going.

One thought on “More Than Just a Crown”

Took on #Lollapalooza 2021 with my festival buddy since 2014!!! It felt so good to hear live music again. 🥺😭
Reminiscing on the dreamiest shoot ever with @hopesbridaldavenport. 🤍
My heart is always full when I'm with you. ❤
3 years ago, my life changed forever. As one of my pageant sisters recently said, I am still receiving the blessings from that year and title. Quite honestly, this year launched me into my career more than I could have ever imagined. For that, I will always be grateful to this organization. Oh, and graduating debt free is pretty cool too (thanks @missiowaorg!!!!).
Staying busy today with our parent company Nexstar's Founders Day of Caring! @whbftv chose to support the nonprofit @oneeightyzone in Davenport which helps those in our community that need it most. We're beautifying their outdoor space which will help their residents enjoy this great summer weather. I can't wait to see how this all comes together! #NexstarCares #NexstarNation
Viewz. 🌄 Swipe right to see struggling on the hike. 🥴😂